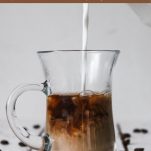 Over the past few years, “mylk,” or any plant-based milk, has been growing in popularity. These mylks can be made from a variety of things like almonds, soybeans, cashews, oats, coconuts, bananas, and more. One of the most popular mylks out there is almond milk.

This is important because the high levels of phosphorus in cow’s milk may build up in the blood of someone whose kidneys are having a hard time clearing these nutrients. Almond milk also has a lower amount of potassium than cow’s milk and potassium is another nutrient that your kidneys need to work hard to clear.

If you are looking for non-dairy milk but want something other than almond milk, there are a bunch of options out there. Here are some great substitutes to try:

If you are planning to cook or bake with almond milk as opposed to cow’s milk, you can substitute the almond milk at equal amounts for what the recipe calls for.

Just note that a recipe made with almond milk may bake a little quicker, due to the amount of water (which evaporates quicker) in almond milk. Sweet treats, like cookies, pancakes or bread, may also look a bit paler than when cooked with cow’s milk, but it tasted just as delicious as if you were to cook it with cow’s milk!

How To Freeze Almond Milk

Most store-bought almond milk has a short shelf life of about seven to ten days after opening. So if you are interested in preserving your almond milk for a longer period of time, then freezing it can be a good option for you.

If you decide to freeze your almond milk, just be aware that the texture, color, and taste may change after freezing, but using a blender to mix it well will help to return it back to its original state.

Another option is to freeze the almond milk in its original container, leaving it unopened. This will limit the milk’s exposure to oxygen, which again, makes the changes to the milk less noticeable.

If you have already opened the milk that you are planning to freeze, you can also freeze it in an airtight container. Just make sure to leave an inch or two of the container not filled, because the milk will increase in size as it freezes (due to the amount of water in the milk).

How To Thaw Almond Milk

It is very easy to thaw your frozen almond milk, just remember to never thaw your almond milk at room temperature- the thawing process should always be done in the refrigerator.

Once the milk has thawed in the refrigerator, throw the milk into a blender. This will help to get the texture, consistency, taste, and color to be closest to what it was before you froze it.

After it is blended back together, don’t be alarmed if it looks a tiny bit different and tastes a little bit off- that is normal but it is completely safe to drink and use.

After the almond milk is thawed, it’s self-life is only about three to five days, so make sure to use it quickly!

Frozen almond milk can be thawed and then drank like usual. Or, you could try gently heating the frozen milk to make it a similar consistency to coffee creamer, which is great to use in drinks, such as coffee, tea, or hot chocolate.

Benefits of Cooking With Almond Milk Instead of Cow’s Milk

If you are trying to cook or bake a vegan or dairy-free meal or treat, almond milk is a great substitution for cow’s milk. It is also beneficial because unlike cow’s milk, almond milk is naturally lactose-free. Lactose is a specific sugar that is found in milk and studies show that up to 65% of people have difficulty digesting lactose, leading some people to develop a condition called lactose intolerance.

If you have a recipe that calls for you to boil milk, almond milk can also be boiled! Simply boil it like you would boil cow’s milk or even water. Put almond milk into a pan and put on low to medium heat until it starts to boil. You can also boil it in the microwave, checking it at 30-second intervals to make sure that it does not burn.

Almond milk is one of the best plant-based milk to cook with because it is so easy to substitute into a recipe and it has such a small almond flavor that when you cook with it, you will not be able to taste the almonds.

If you are looking for a use for your frozen almond milk, or are wanting to make a dairy-free or vegan ice cream easily right from your kitchen, these recipes will be perfect for you.