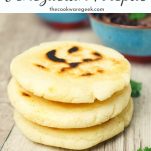 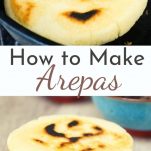 As a Venezuelan, I cannot imagine a Sunday in my life without the smell of recently made arepas and coffee in my mom’s house. It’s part of my Sunday tradition.

Now that I live on my own, I keep making arepas in my weekends and it’s just like being at home.

As Venezuelans, we have a deep connection with arepas. If you thought that I was serious about tequeños … well, arepas are even a more serious business for me.

In this article, you will know all the information about arepas and how to make them. I already made a full article about the best fillings for them. After you make your arepas, check the other article for ideas to stuff them.

Basically, arepas are a flatbread made of corn and made with special precooked corn flour.

The most known brand is Harina pan. It’s a granulated flour that when mixed with water produces a heavy dough that is easily shaped into discs.

Arepas are cooked in a cast iron flat grill that is called . You can easily use a cast iron pan to get the exact same result.

The result is a crusty hard exterior with a tender inside. You can easily open and fill them with a vast variety of fillings.

The day I took the pictures I just added some refried black beans and cheese. It was an easy, quick and fulfilling breakfast. Arepas have the properties of making you feel satisfied for hours.

Can you make arepas with Mexican Masa Harina or Maseca?

Masa harina is also made of corn. It’s a nixtamalized corn flour that has a softer more dusty appearance than Harina Pan. It’s used as the base for corn tortillas.

Arepas need a thicker dough that can hold the shape and masa harina is designed to make thin tortillas. So, you end up adding way too much masa harina to get an arepa-like dough.

The result is totally different from traditional arepas. The inside is not completely cooked and kind of gooey. Not a good thing.

Here in Portugal it’s way easier to get Masa harina and I naively thought that I could make it work: wrong!

This is great news for all those that are looking for a bread substitution that is 100% gluten-free. Arepas are a celiac friendly option.

Thanks to this feature arepas are getting more attention than ever.

How to cook arepas?

The three most popular methods are:

In the (or cast iron pan) using the stovetop: This is the classic way to make arepas. The dough discs are placed in the pan and when a full crust is formed — with the characteristic black spots— you can flip it. This will take about 10 minutes per side.

In the oven: there is no way to make the entire process in the oven. But a technique that is pretty famous in Venezuela is to form the crust in the cast iron pan (about 2 minutes per side), and finishing the cooking in the oven for 15 minutes 180ºC.

This will give you perfect arepas that are evenly crusted.

Fried: Secretly, my favorite way. It’s not the healthiest so I limit the number of fried arepas during the week. They are A-MA-ZING.

A trick is to make a hole in the middle. This will ensure that the center is fully cooked. Another great thing with fried arepas is that you can add cheese to the dough and have a cheesy arepa that doesn’t need filling. My grandma called this arepa con de queso. I just love it!

Are arepas Venezuelan or Colombian?

Don’t make me go there…

If you have to ask, I will have to respond: 100% VENEZUELANS *plays the Venezuelan anthem*

This is a heated debate between Venezuelans and Colombians. Don’t get me wrong, I love Colombia. I’ve been in Bogotá at least 4 times in my life and I must say I really love it there.

The thing is that we share a border. And, let’s be honest: we share more than we think we do.

There are recipes that are virtually the same, and arepas are one of them.

According to historians, the use of corn to make bread appears in the region at the same time. Back in those days, there weren’t borders. So, yes, technically arepas are from both countries.

The thing that changes is the importance of arepa in each country.

In Colombia, arepas are served simple with a bit of butter on top and maybe some cheese.

In Venezuela, we fill them with almost anything under the sun: chicken, beef, cheese, beans, sausages, eggs, shrimps, etc.

Hence, this version of arepa is the one that is most known worldwide. When people think about arepas, they picture a filled arepa, not a simple one.

Also, in Colombia, is a part of the vast and rich gastronomy. They usually serve it as a light breakfast or as bread with other big meals like paisa.

In Venezuela, arepas are the star of our gastronomy. We can basically eat, arepas for breakfast, lunch, and dinner. The filling makes this otherwise boring flatbread into a culinary experience.

Summarizing, the concept of arepa can be restored to both countries almost at the same period of time. Both Colombia and Venezuela can claim simple arepa as theirs. But, the filled and most popular arepa version, will always be Venezuelan.

How to make arepas? 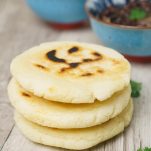