Creamy and spicy shrimp and sausage pasta is one of the yummiest Cajun seasoned dishes that I’ve ever tasted. Easy and in less than 30 minutes!

I’ve wanted to bring this creamy pasta recipe to the blog for so long and I just never got all the ingredients at the same time. Am I the only one person that always forget a crucial ingredient for a recipe and ends up doing something else? I’m just that distracted.

However, this week all the stars aligned so I could bring you the most amazing Cajun shrimp and sausage pasta that you will ever taste. Not even exaggerating!

It’s a creamy and luscious pasta with a highly spiced sauce of Italian sausage and fresh shrimp. If you think it sounds amazing, just wait until you taste it. Even though I’m not a pasta girl, I couldn’t keep myself from eating another plate.

The key flavor of this recipe is the cajun seasoning and every time a recipe calls for Cajun seasoning I found myself in the same dilemma: Here in Portugal, THERE IS NO CAJUN SEASONING.

And because I’m a foodie in all the sense of the word, I made my homework and I learned how to make Cajun seasoning from scratch at home.

Turns out that the vast majority of the ingredients I already had in my pantry. Some girls collect makeup and clothes, but I collect spices in my pantry.

How to make homemade cajun seasoning?

Cajun seasoning is the core of Louisiana cuisine, but more specifically Creole food. This type of food is highly influenced by the French cuisine and you will notice it in the herbs and spices selection.

Usually, cajun seasoning is used in meats such as shrimps, crawfish, chicken and sausages.

So in case that you are unable to get cajun seasoning, I’ll let you the proportions to get it from scratch:

Now you can have cajun seasoning no matter where you are in the world. You can store it in a jar and it will last several recipes.

Useful tips to make this creamy shrimp and sausage pasta:

This is a simple recipe but it needs to follow the steps carefully to get the maximum amount of flavor.

The first thing is to cook the sausages with butter and cajun seasoning to get that brown color and the fat of the sausages. Then, in the same pan, we cook the shrimps until they are brown and coated with that Cajun and butter mix.

Also, shrimp cooks fast and it’s delicate meat so we need to cook it for 5-7 minutes and then remove it and add it at the end of the preparation. This way we preserve the integrity of the shrimps.

After we create this flavor base, the next step is to get the most amazing and rich sauce. In the same pan, pour some chicken broth and deglaze the pan. Then add the heavy cream and cook until you get a creamy consistency. Finally, add the shrimps and sausages and the cooked pasta.

I like this pasta by itself but a sprinkle of parmesan cheese makes this dish unforgettable. It’s a luscious pasta to remember.

I hope you enjoy this recipe and I see you in the next one! 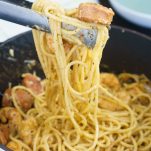