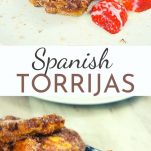 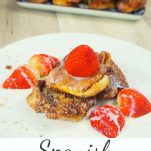 One of the most famous Spanish desserts: Torrijas. These are so decadent that you can’t eat just one.

Another traditional Spanish recipe on this blog. I just can’t get over Spanish cuisine.

Torrijas are a holiday dessert that is often prepared during “Cuaresma” and “Semana Santa”. They are as popular as con leche.

They are basically bread soaked in milk — other versions use wine or syrup — then covered with egg, fried in olive oil and coated with sugar and cinnamon.

Sounds a bit weird I know. I was skeptical when I heard about the process but I was gladly surprised at the first bit.

It resembles a french toast but it’s way better in my opinion. The bread is soaked for more time into the milk and the result is a slushy inside and a crusty outside thanks to the beaten egg.

You can eat it by itself or taken along with some hot chocolate as a “churro” or with some condensed milk for extra sweetness.

I decorate three of these torrijas with some sweetened condensed milk and big red strawberries. They are so heavenly.

What type of bread is good for torrijas?

I would honestly say that any french bread that is spongy can work with this recipe. In Spain they sell torrijas bread but it isn’t easy to find outside of Spain.

It’s better if it’s an old bread because it will absorb way more milk and it has more consistency and it won’t crumble while cooking.

But if you want to make torrijas and only have a fresh bread you can just let it soak for less time in the milk. The key is to see that the bread is completely soaked but still holds its shape.

I would say that old bread can be soaked for 10-15 minutes and fresh bread for less than 8 minutes.

How to cook Spanish torrijas?

It is quite easy, yet you will need some organization to get a nice result.

As I’ve mentioned you need to soak in milk (for 10 minutes depending on how hard is your bread loaf), then soak into beaten egg. fry in olive oil and then slightly smash the torrijas white you cover them with cinnamon and sugar.

Because there are so many steps I highly suggest you set up a mini production chain. This way you have all the steps already prepared and you don’t burn accidentally your torrijas while doing another step.

Also, you will need to make this recipe in batches to avoid overcrowding while frying. Every torrija must have enough space to fry without sticking to each other.

I hope you enjoy this Spanish recipe and I see you in the next one! 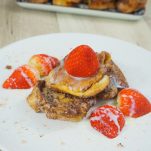