These Spanish Natillas are one of the easiest desserts that require absolutely no baking skills. This is the traditional recipe of the “Abuela” and it’s a delicious, creamy, and almost silky vanilla flan with a touch of cinnamon.

This recipe is similar to a crema Catalana but it is simpler and doesn’t have a caramel crust. Instead, natillas are topped with a maria style cookie.

I love recipes that are uncomplicated and tasty. I believe that you don’t need the fanciest and expensive ingredients to make something delicious and tasty.

The first step for natillas is to make the milk as flavorful as possible. The two main spices are vanilla (essence) and cinnamon sticks. So, I start by heating the milk over medium heat and adding 1 cinnamon stick, 1 tbsp of vanilla essence, and sugar. I let it simmer for about 2 minutes. Do not let the milk boil because it burns easily and you don’t want your natillas with a smoking burnt taste.

Take the milk out of the stove and let it rest for about 10 minutes. This way, the milk is completely infused with cinnamon and vanilla flavor. Also, this time will allow the milk to chill a bit so you can use it to temper the egg yolks.

In the meantime, beat the yolks and mix with the cornstarch. Pour a little bit of milk — about ¼ cup — to temper the eggs and prevent them from cooking too fast and forming hard lumps in the custard.

Then put the milk back into the heat but this time just uses low heat. Slowly add the tempered egg mixture.

At this point, it’s best to keep stirring constantly and do not get distracted with your phone — like I always do. Because the custard will start to thicken quickly and you don’t want to burn the custard at the bottom. So, as soon as the consistency is flan-like, remove it from the heat.

Finally, transfer to individual molds or ramekins and top with 1 maria cookie per container. Take to the fridge for at least 4 hours. I prefer to let them overnight so you get a better consistency.

For decoration, I like to sprinkle some powdered cinnamon but it is not necessary. 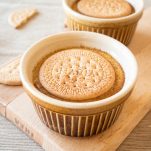