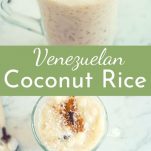 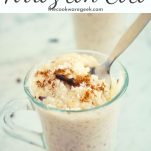 The popular Venezuelan Arroz con coco is the most important dessert for “Semana Santa”, which is like the Venezuelan version of Easter. We usually make a big batch of Arroz con coco or Arroz con leche for this holidays and we enjoy it as a family tradition.

I must say that it’s pretty much the same as Puerto Rican Arroz con Dulce. In Latin America we share a lot of recipes with different names.

This is like the fun cousin of the traditional Arroz con leche. The recipe is quite similar — the spices are the same — but there are some twists in this version.

The first difference is that you don’t cook the rice into the milk. The reason is coconut milk is way dense — and fatty — than regular milk. So cooking the rice in this type of milk would make really hard for the rice to cook well. Also, you would have to add 4 times the amount of coconut milk and if you think that this Arroz con coco is a caloric bomb, just imagine 4 times more fat.

This is a delicious recipe that has history and tradition behind its process.

As I often write here in The Cookware Geek, food is something that connects us to our roots. And I love to share a piece of Venezuela with all my readers.

See you in the next recipe! 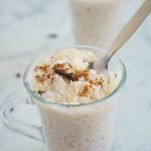