Mexican Chori-Pollo is one of the easiest taco fillings that you can find. It also works as an ethnic main dish if served with rice and avocado. Only 20 minutes and done!

My long affair with Mexican food hasn’t always been like this. I used to dislike Mexican food when I was younger. But my boyfriend Mexican food and soon I became a newly converted taco girl. Boyfriend note: DE NADA 🙂

And in my continuous Mexican cravings, I keep experimenting in my kitchen with more authentic Mexican recipes. Besides the most popular Mexican recipes like chicken tinga or shrimp taco, I think – doesn’t have the recognition it deserves

I mean it has chorizo, chicken and melted cheese with a spicy seasoning. What else can you ask for taco Tuesday?

Another great thing about this recipe is how easy it is to make. You only need one pan and that means fewer dishes to wash. 20 minutes for the entire process and you are ready to serve.

How to make authentic Mexican ?

One tip is to use a cast iron pan. It’s not mandatory, but it adds a greater golden and semi-crispy finish to the chicken. Also, you get all the flavor from the meat that “sticks” to the bottom of the pan. When you scratch the surface while cooking the onion and garlic, it brings an extra layer of flavor.

This is a single pan recipe, and for that reason the only thing that is important is to add the ingredients in the right order.

First, I start with the chicken breast. I like to butterfly them to get a thinner chicken that cooks faster. I season the chicken with salt, pepper and oregano and then I let it cook until golden/brown for 3-5 minute per side over medium heat. Then I remove it and let it sit on a plate to allow the juices to come back.

Then I cook the onion and garlic while stirring to get the chicken flavor from the bottom of the pan (this is way easier in a cast iron pan).

As soon as the onions are semi-transparent I add my ground chorizo.

Some chorizos — especially fresh chorizos— can be smashed directly in the pan. You just need to remove the skin that covers them, cut them and break up it while cooking.

In my case, the chorizos I bought are way harder to tear. I just take away the skin and grind the chorizo meat in a food processor. Pulse just a few times; you want ground meat consistency, not a paté.

Now while the chorizo is cooking add all the seasoning (paprika, cumin, salt, and pepper) and the chicken cut into bite size pieces. Mix all well and sprinkle with cheese. Let it in the pan for a couple of minutes to allow the cheese to melt. Then serve with some jalapeños and avocado. 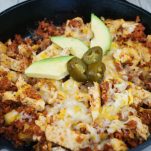