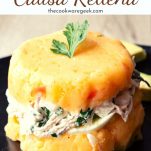 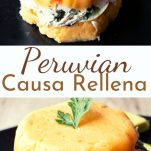 A classic of the Peruvian cuisine: causa rellena de pollo. Delicious, fresh, creamy and filling. You can serve it as an appetizer or as a main dish along with ceviche.

This dish is like a Sheppard pie but with a creamy chicken filling instead of meat.

It has a layer of mashed potatoes with Peruvian yellow pepper seasoning.

A layer of creamy chicken.

A layer of hard-boiled eggs

And a layer of avocado (my favorite ingredient on the world)

It’s a delicious recipe and one of my favorite Peruvian dishes. It has a lot of flavors and it tastes kind of fresh thanks to a few drops of lime here and there.

How to substitute the Peruvian yellow pepper paste?

This is the million-dollar question when you live outside Peru. Peruvian yellow pepper is the star of this dish and it’s a key ingredient in Peruvian cuisine. It’s usually used as a thick paste called pasta de aji amarillo.

The thing is that it’s hard to get outside Peru. In Venezuela, it was easier to get it from a local Peruvian grocery store, but here in Portugal, it’s almost impossible.

So, I came out with a substitution — it resembles the flavor, but unfortunately, it’s not the exact same.

I use orange bell pepper and cayenne pepper for heat.

First, cut the bell pepper in halves and deseed. Then boil them for 15 minutes until the skin starts to peel off the flesh.

Let them chill until you can peel them without burning your hands. Toss them into a blender and add 2 tbsp of vegetable oil (sunflower, canola, corn) and a pinch of cayenne pepper.

Peruvian yellow pepper it’s mildly spicy, so a touch of cayenne pepper is good enough. I add ¼ tsp to this mix.

How to make the chicken filling?

This is a pretty easy filling that requires only 4 ingredients: boiled shredded chicken — you can totally use leftover chicken or rotisserie —, purple onion, mayonnaise, and fresh parsley. Plus some pepper and salt.

Just mix all the ingredients until the mayo is evenly distributed.

After you have all the elements of the causa rellena, it is the moment of assembling.

I use a ramekin for this and I like to start layering with some mashed potatoes, then chicken, avocado, hard-boiled eggs and a final layer of mashed potatoes.

Then, carefully unmold the causa over a dish and serve immediately. If you let the causa de pollo in the ramekins for 10 minutes before unmolding, you will get a more solid structure. 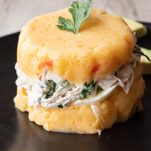