I looooove this video game. I’m not what you can call a gamer girl but I have a few games that I enjoyed until the last second.

This 18 of September “Undertale” was available for Nintendo switch and that was my opportunity to reconnect with this lovely and funny game.

Also, I remembered the famous Toriel’s butterscotch cinnamon pie that gives you a full healing in the game.  And as always, I wanted to bring this recipe to the blog!

I’m super thrilled with the outcome of this recipe. The filling of this pie is A-MA-ZING! It is out of this world.

For those that don’t know, butterscotch is basically a candy made of brown butter and brown sugar.

To get “brown butter” you just need to melt the butter and let it cook over medium heat for a couple minutes. As soon as the butter starts to turning brown we need to take it out of the stove — butter burns fast — and there it is: brown butter.

This recipe has also a lot of fall flavors — cinnamon, brown sugar, and nutmeg —- so, even if you aren’t a fan of Undertale you still can enjoy a slice of pie with a cup of pumpkin coffee!

I hope you like this recipe and I see you in the next one! 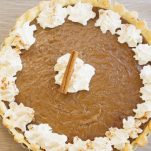 Owner and Food blogger on The Cookware Geek. She loves cooking, baking, drinking coffee, playing with the cats, and knitting. She believes that eating delicious meals doesn’t require a culinary degree or a Michelin star chef in your kitchen.